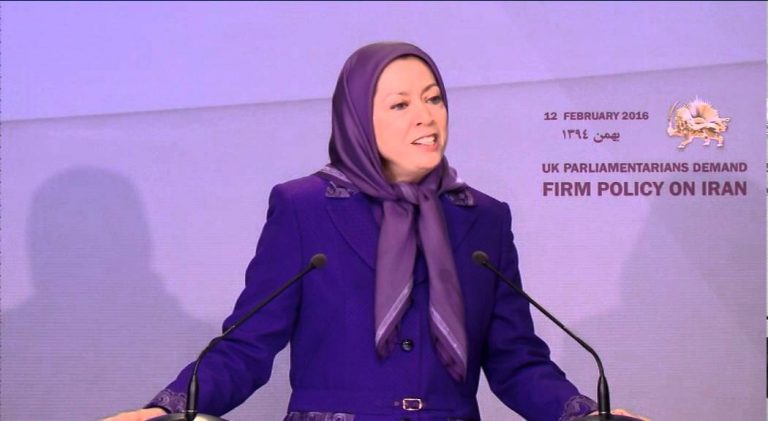 Speech at conference with British MPs
12 February 2016
« Firm Policy on Iran, Supporting Iranian Resistance » conference with a number of British MPs and dignitaries attending
Posted in Meeting
Maryam Rajavi: Rouhani is not a moderate; revenues from deals with Iranian regime are spent by the IRGC on terrorism and war in the Middle East, insecurity in Europe
Friday, February 12, 2016, a conference entitled, « Firm Policyon Iran, Supporting Iranian Resistance », was held at the office of the National Council of Resistance of Iran, north of Paris with a number of British MPs, officials and dignitariesparticipating.

Rt. Honorable David Jones, former senior secretary, President of the International Parliamentary Campaign in Defense of Ashraf and President of the Parliamentary group for a Free and Democratic Iran, presented a declaration signed by 200 members of British Houses of Parliament to Mrs. Maryam Rajavi.
In her address to this conference, Mrs. Rajavi applauded the British MPs’ declaration and said: Some in the West claim that doing business with Rouhani will lead to the regime’s moderation, while Rouhani is no different from Khamenei and has been involved in all the regime’s crimes over the past 37 years. But even if he were any different, he does not have much authority within the regime. Therefore, every contract signed with Rouhani is a helping hand to the mullahs’ Supreme Leader. At least half of Iran’s GDP is controlled by Khamenei and his Revolutionary Guards Corps. Therefore, most of the contracts signed with Iran are actually signed with companies that are affiliated with Khamenei or the IRGC. And the IRGC spends this money on terrorism and war in Syria and ultimately threatens the very security of Europe.
In addition to Rt. Hon. David Jones, Sir Alan Meale, Vice Chairperson of the Socialist Group in the Council of Europe; Lord Tony Clarke; Jim Fitzpatrick MP, former Minister of State for Farming and the Environment; Mark WilliamsMP; Toby Perkins, MP, senior secretary and Shadow Minister of Defense; Dr Matthew Offord MP; Mike Freer MP; Martyn Day MP, representative from the Scottish National Party; and Mrs. Clair Offord, Attorney, were among the participants and speakers at this conference.